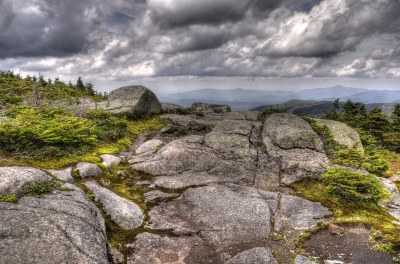 It's hard to put into words the feelings of the last few days. Early in 2014, my wife, Peggy, and I agreed to join a group of our friends on a hiking trip in the Adirondacks.  We have always enjoyed the Adirondacks, but our past trips there have been mostly for sightseeing. This time, however, our goal was to climb to the top of Mt. Marcy.  At 5,343 feet, Marcy is New York's highest peak. Although we are avid walkers and pseudo runners, we had never hiked--not even one day of our lives!  So, this goal seemed an impossible feat, but nonetheless, we were excited to give it a try. Prior to our hike, we soaked up advice from experienced hikers. Some of this advice was good, some not so good, some scary, and some that caused us to think if this was a good idea.

Arrival in the Adirondacks on July 13, 2014 to begin our stay at the Adirondack Mountain Loj, outside Lake Placid, was very exciting. We arrived in rain and the forecast for the next few days was not expected to be very good, so our group began to think of alternative hikes in case we got rained out.  I got up at 6:00 am the next day to see the morning sun push out the black clouds and bring beautiful blue sky with fluffy white clouds everywhere. The morning light on Heart Lake, adjacent to the Loj, was spectacular, so I grabbed my camera and tripod to capture this gorgeous light and the stillness of the water.  Absolutely beautiful!  The sun finally filled the area where I was standing, resulting in a gorgeous view of some of the High Peaks.  Some of those photos are included here.  This was 15 minutes of fast shooting with little time for composing or thinking about what I was doing.  The reflections on the calm water tells the story.

We signed in at the Loj to begin our hike at 8:00 am not realizing what the next 12 hours would bring us.  Although there were 13 in our group, only five of us decided to climb Marcy. Our friend, Diane, was doing the hike in recognition of  her 50th birthday, and friends Jill and Bolgen, our fearless leaders and avid hikers, were there to guide us and give us confidence--which they did brilliantly!

We arrived at Marcy Dam within the first hour.  A simple task.  A piece of cake.  The next five hours, however, were anything but simple.  No yellow brick road here.  This was all rugged Adirondack hiking and rock climbing.  Within the first hour past Marcy Dam, we were into some tough terrain over mountain streams, rocks and boulders.  For the next five hours, the terrain got more challenging, becoming much more than I expected.  In fact, most of the times there really was no trail at all, just big boulders to climb over. I dragged my camera along with me--probably not a good idea--to capture the hike and the view at the top. My favorite photos are found below.

We arrived at the Marcy Summit around 2:00.  This was the stopping point for me, Peggy and Diane. It would have been another hour to the top and down, and seeing our time was limited, I wanted the photo time and the time to appreciate the incredible view.  The clouds were amazing, and it was truly like being on top of the world. Capturing this was easy; every view was incredible, and it didn't take much thinking or creative photography to get good shots.  I darkened the clouds on some of these for additional effect.

Our descent back down to the Adirondack Loj began at 3:00.  We would have to beat our climb time to make it to the Loj before it got dark.  As I quickly learned, the return trip down the mountain was harder than the climb up. The steep terrain made it difficult to stay afoot; coordination and balance were key. For the next five hours, we maneuvered over the same boulders we had experienced only a few hours before, yet this was more challenging and certainly required more of a work out.  At times, my hiking boots felt like concrete blocks.  Four hours later, we were happy to finally see Marcy Dam.  It was 7:00, only one hour more and our journey would be over!  That easy trip from the Loj to the Dam in the early morning, suddenly became an exhausted hour-long trip that seemed endless. When we arrived at the Loj at 8:00, we all celebrated the success of our journey.  Afterward, many of the people we met at the Loj told us that we were "crazy" to make Marcy our first-ever hike.  We probably were, but we had great guides, a lot of encouragement, and the desire to make this "bucket list" experience a true success!

Many thanks to my wife, Peggy, and to Heather, Dennis and Susanna; Ed and Marsha; and Mike, Ellen and Ian; and, of course, Jill, Bolgen, and Diane for the support and great laughs over the last four days!

Scott, you have some amazing photos here. Not just the Marcy pictures but all you others too. Beautiful photography. You have quite a talent.

These photos are incredibly beautiful and truly capture the beauty and essence of the untouched wilderness. The clarity of these photographs is unsurpassed.

These are fantastic photos! They are beautiful and dramatic...